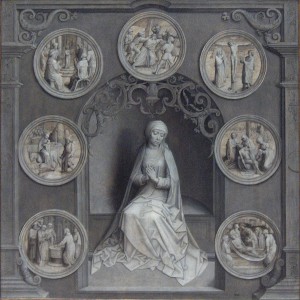 Thomasines and St. Thomas Christians call to mind the seven sorrows of the Blessed Mother of Christ. Some brethren meditate on these on a daily basis, whereas others make this an annual observance with an evening meal (after the Friday fast) in honour of M’shikha and His Blessed Mother.

We meditate on each sorrow and the passages from the Peshitta related to each one.

The Prophecy of Simeon
“And Simeon blessed them, and said to Miriam his mother: Behold, this is set forth for the fall and for the rising of many in Israel, and for a standard of contention; (and also a dart will pierce thy own soul); that the thoughts of the hearts of many may be disclosed.” (Luke 2:34–35)

The Holy Family Flees to Egypt
“And when they were gone, an angel of Mar-Yah appeared to Yusef in a dream, and said to him, Arise, take the child and his mother, and flee into Egypt; and be thou there, until I tell thee: for Herod will seek for the child, to destroy it.” (Matthew 2:13)

Child Yeshua Lost in the Temple
“And when the days were completed, they returned: but the child Yeshua remained at Jerusalem, and Yusef and his mother knew not; for they supposed he was with his companions. And when they had travelled a day’s journey, they sought him among their people, and of every one that knew them. And they did not find him. And they returned again to Jerusalem, searching for him.” (Luke 2:43-45)

Meeting of Yeshua and Miriam on the Way of the Cross
“And there followed after him a great multitude of people; and those women who wailed and lamented over him.” (Luke 23:27)

Crucifixion
“And there were standing near the cross of Yeshua, his mother, and his mother’s sister, and Miriam of Cleophas, and Miriam Magdalena.” (John 19:25)

Removal of Yeshua from the Cross
“And when it was evening, there came a rich man of Ramath, whose name was a Yusef, who was also a disciple of Yeshua. This man went to Pilate, and begged the body of Yeshua. And Pilate directed the body to be given him. And Yusef took the body, and wrapped it in a winding-sheet of clean linen.” (Matthew 27:57-59)

Yeshua’s Burial
“And they bore away the body of Yeshua, and wound it in linens and aromatics, according to Jewish burial customs. And there was a garden in the place where Yeshua was crucified, and in the garden a new sepulchre in which no person had ever been laid. And there they laid Yeshua, because the Sabbath had commenced, and because the sepulchre was near.” (John 19:40-42)

(Passages are based on James Murdock’s translation of the Peshitta)